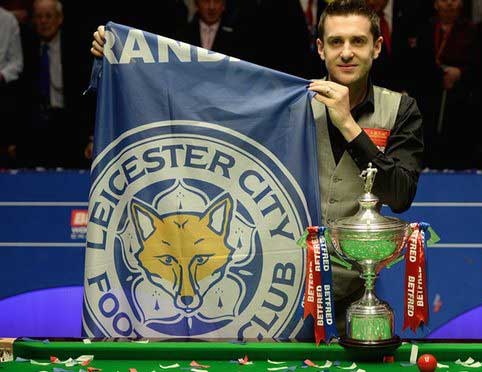 World Championship Snooker 2016 Mark Selby became the 6th player to lift snooker’s most famous trophy more than once at the Crucible by beating Ding Junhui 18-14 in the final of the Betfred World Championship.

Mark’s safety game and match play snooker made some frames quite long and change the rhythm of many of the matches he played in. Basically it was Mark Selby not at his best but still able to compete and turn matches through not giving up and extending frames.

In Australia Selby’s safety and match play I would compare to Robby Foldvari in changing the rhythm of matches to a safety game. This to many of us changes a match from be able to play and get in a pace around the table and when you get chances you just can’t capitalize.

Selby, who first won the title in 2014 by beating Ronnie O’Sullivan by the same score line, joins Steve Davis, Stephen Hendry, Mark Williams, John Higgins and O’Sullivan as the only players to lift the trophy more than once at the Crucible. Overall he is the 13th multiple winner in the sport’s history.

It was a remarkable night for Selby’s home city as Leicester secured football’s Premier League title just minutes before the last balls went down in Sheffield.

Collecting a record check for £330,000, 32-year-old Selby retains his world number spot and has now been top dog in the rankings at the end of the season for the past five consecutive years. This World Championship is his seventh ranking title and sixth success in a Triple Crown event having won three Masters crowns and one UK Championship.

However, Selby – who has remarkable mental toughness and never-say-die attitude – showed his experience to close out the match and the seventh ranking title victory of his career keeps him top of the world rankings for a fifth straight year.

The best matches I believe where Ding v McManus and the Upset of Ronnie v Hawkins. Alan McManus played some great snooker and attacked the balls which was great to see.

Ding’s scoring power in the Semi Finals made a new record for century breaks of 7 in the match and if another player was in the final it could have been a great scoring match.

Session 3 The Final – update when it comes in

Erica
发自我的 iPhone
World Cue Sports
5
2020-02-20T23:23:18+10:00
Thanks he is very happy with his new cue and the gift certificate has made him happy and he loves the cue. Great to see my phone call prompted you into a new extension for the site and another idea. Erica 发自我的 iPhone
https://www.worldcuesports.com.au/testimonials/41926/
Hi Michael, let me say that I’ve re-tipped the cue and it’s deadly, man, really deadly. I might even get a 100 before the week is out !!

Joe Saliba
World Cue Sports
5
2020-02-20T23:22:32+10:00
Thank you it was nice to do business with you looking forward to putting up the Timesafe light. Looks great at Hornsby RSL. regards Joe Saliba
https://www.worldcuesports.com.au/testimonials/41925/
Received the Newbury last night and it plays great and getting a lot of interest at the club.