View cart “Tweeten Triangle Chalk 12 Pieces Green” has been added to your cart. 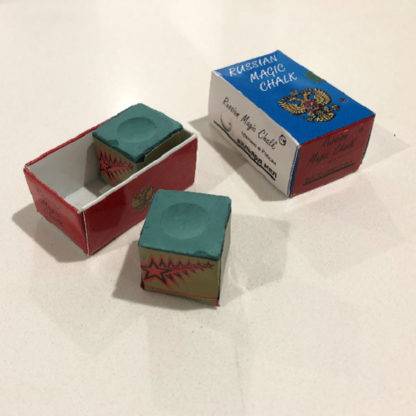 This for me is currently the best chalk for snooker by far. May mark the cue ball a little depending if you use a hard tip but it has the best grip of any chalk we’ve used. Not just us saying it its been tested in the USA and has outstanding results.
On soft and medium tips it won’t mark the cue ball as much as a hard tip. I use a medium hard tip and it does mark a little but i don’t mind as i get the best in grip.

In the coming six months i’ll also be coming out with chalk and i want it to be this good or better minimum and must go on the tip like this.

This listing is for Russian Magic Chalk in Green which is similar to the spruce colour from Tweeten.

For me this is one of the best chalks in grip of any chalks but with grip it does mark the cue ball slightly. Ive been using this myself and i’ll only switch when i can find another chalk that applies as good that doesn’t mark the cue ball.

From testing in the USA with other chalks by Dr Dave this rated the best in shots played without a miscue and it rated at 29 shots where other such as Master chalk at 8 and taom at 5 to 6 shots.

1. Rated number ONE chalk by independent testing ( Dr Dave)
2. Less miscues, chalk stays on tip better than any other brand
3. Can shoot off center shots and draw shots more consistently
4. Does not make a mess on the table, shaft or your hands

You can check the videos and results online at https://billiards.colostate.edu/faq/chalk/comparison/

Follow-up for Taom chalk tests (from NV J.7 – Chalk Testing Follow-Up, Taom vs. Master, and How to Chalk Properly):

The only experiments I did with these two chalks were the “number of hits before miscue” test and the “maximum-spin miscue limit” test.

Concerning miscue limit, both chalks had very similar results as compared to all of the other chalks tested. I could not detect or measure any difference among any of the chalks concerning the maximum-spin miscue limit (although, the Silver Cup miscue limit didn’t seem to be quite as far out as the others, but it was very close).

Concerning the “number of hits until miscue,” Silver Cup was very similar to Master (flag and pre-flag) and Lava. However, the Magic Chalk was off the charts!!! That stuff really remains effective on the tip for a long time! Here’s a summary of all of the data in this category:

Erica
发自我的 iPhone
World Cue Sports
5
2020-02-20T23:23:18+10:00
Thanks he is very happy with his new cue and the gift certificate has made him happy and he loves the cue. Great to see my phone call prompted you into a new extension for the site and another idea. Erica 发自我的 iPhone
https://www.worldcuesports.com.au/testimonials/41926/
Mate, seriously… I love your service… You’re on the money.

Got it thank you - outstanding cue!
https://www.worldcuesports.com.au/testimonials/43615/
Hey I love the newbury cue! Putting some frames in with it as I wanna use it in comp next Tuesday. Thanks heaps!

Thanks again for the great service.
World Cue Sports
5
2020-02-20T23:21:41+10:00
My order arrived on time and with a surprise Phoenix tip – Thanks heaps I will give it a go. Thanks again for the great service.
https://www.worldcuesports.com.au/testimonials/41924/
Got the cue case and the cleaning cloth = Brilliant! Ta tonnes for your service! 5 star!

Orrin
World Cue Sports
5
2020-02-20T23:37:59+10:00
Got the cue case and the cleaning cloth = Brilliant! Ta tonnes for your service! 5 star! Orrin
https://www.worldcuesports.com.au/testimonials/41941/
Just like to say how happy I am with your products and how fast they are arriving. Very happy, will definitely be ordering more soon! Thanks guys!

Hey Mike, the cue plays wonderful. Thank you for the service. Greeting from The Netherlands
https://www.worldcuesports.com.au/testimonials/43226/
Hi Mick, just a big thanks for the new snooker cue. Best I’ve ever had and thanks for coaching!

Hi Mick, just a big thanks for the new snooker cue. Best I’ve ever had and thanks for coaching! Cheers
https://www.worldcuesports.com.au/testimonials/42829/
Hi Mick,

Thanks for the quick delivery.
World Cue Sports
4
2020-02-20T22:34:16+10:00
Received the Newbury last night and it plays great and getting a lot of interest at the club. Thanks for the quick delivery.
https://www.worldcuesports.com.au/testimonials/41909/
A week ago I ordered the model from this link. And yesterday I receive the package, in very good condition and without problems. I'd like to tell you that I tested for 3 hours and I want to tell you that it is exceptional. I feel like I've had it for a few years. Is way beyond what I've had so far (Parris). I'm really sorry I didn't do it before. If you ever do this cue again, please let me know.

Kind regards Carl Watts
World Cue Sports
4
2020-02-20T23:29:57+10:00
Feedback I promised regarding the g2 tip you kindly gave my colleague to try, he has glowing reports of it‘s performance, feel and general cue ball responsiveness, he thanks you again, I will have to get one myself next time I purchase. Kind regards Carl Watts
https://www.worldcuesports.com.au/testimonials/41932/
Thank you it was nice to do business with you looking forward to putting up the Timesafe light. Looks great at Hornsby RSL. 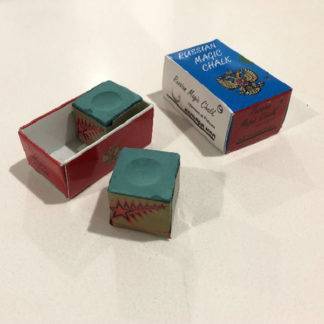 You're viewing: Russian Magic Chalk $18.00
Add to cart
This popup will close in: