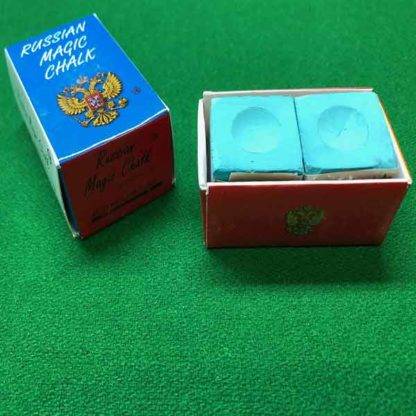 This for me is currently the best chalk for snooker by far.

The chalk here we worked with them to come up with the colour and I’ve been testing it for 6 months. Written (11/02/20)

This listing is for Russian Magic Chalk Light Green, which is like the master chalk green colour from Tweeten.

For me this is the best chalk in grip of any chalks. I’ve been using this myself for 3 months and it gives the best grip and doesn’t mark the cue ball that much at all. The chalk leaves far fewer marks on the cloth than all other chalks except for Taom which I find leave’s flickers of chalk over the table.

From testing in the USA with other chalks by Dr Dave this rated the best in shots played without a miscue and it rated at 29 shots where other such as Master chalk at 8 and Taom at 5 to 6 shots.

1. Rated number ONE chalk by independent testing ( Dr Dave)
2. Less miscues, chalk stays on tip better than any other brand
3. Can shoot off center shots and draw shots more consistently
4. Does not make a mess on the table, shaft or your hands

You can check the videos and results online at https://billiards.colostate.edu/faq/chalk/comparison/

Follow-up for Taom chalk tests (from NV J.7 – Chalk Testing Follow-Up, Taom vs. Master, and How to Chalk Properly):

The only experiments I did with these two chalks were the “number of hits before miscue” test and the “maximum-spin miscue limit” test.

Concerning miscue limit, both chalks had very similar results as compared to all of the other chalks tested. I could not detect or measure any difference among any of the chalks concerning the maximum-spin miscue limit (although, the Silver Cup miscue limit didn’t seem to be quite as far out as the others, but it was very close).

Concerning the “number of hits until miscue,” Silver Cup was very similar to Master (flag and pre-flag) and Lava. However, the Magic Chalk was off the charts!!! That stuff really remains effective on the tip for a long time! Here’s a summary of all of the data in this category:

PRODUCT CATEGORIES
Top Rated Products
Products
Hi Mick, just a big thanks for the new snooker cue. Best I’ve ever had and thanks for coaching!

Hi Mick, just a big thanks for the new snooker cue. Best I’ve ever had and thanks for coaching! Cheers
https://www.worldcuesports.com.au/testimonials/42829/
Thanks Guys,

Taylor Young
World Cue Sports
5
2020-05-12T18:10:27+10:00
Just like to say how happy I am with your products and how fast they are arriving. Very happy, will definitely be ordering more soon! Thanks guys! Taylor Young
https://www.worldcuesports.com.au/testimonials/42590/
Thank you thank you thank you! Got it on Friday, fits perfectly!

Mike Ballam
World Cue Sports
5
2020-02-20T23:33:24+10:00
I have received my new cue and very pleased with it. I will take some photo’s this week and send them to you. Thank you Sam and Mike for putting me correct on the length, spot on. I still love my phoenix unity cue a another very nice cue. Talk to you soon. Mike Ballam
https://www.worldcuesports.com.au/testimonials/41936/
Received the Newbury last night and it plays great and getting a lot of interest at the club.

Kind regards Carl Watts
World Cue Sports
4
2020-02-20T23:29:57+10:00
Feedback I promised regarding the g2 tip you kindly gave my colleague to try, he has glowing reports of it‘s performance, feel and general cue ball responsiveness, he thanks you again, I will have to get one myself next time I purchase. Kind regards Carl Watts
https://www.worldcuesports.com.au/testimonials/41932/
Wow! Seemed like I’d only just finalised the order when the goods were arriving at my door. Incredible service and products are top quality. I’ll be gladly recommending the fantastic Sharp Snooker experience to all friends and acquaintances. Thanks again Mick.

Gary Knight
World Cue Sports
5
2020-02-20T23:24:01+10:00
Wow! Seemed like I’d only just finalised the order when the goods were arriving at my door. Incredible service and products are top quality. I’ll be gladly recommending the fantastic Sharp Snooker experience to all friends and acquaintances. Thanks again Mick. Gary Knight
https://www.worldcuesports.com.au/testimonials/41927/
4.8
34
World Cue Sports
This popup will close in: